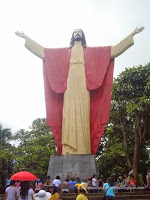 The shrine features one of the country's tallest statue of Christ, Noah's Ark, the Garden of Eden, the Marian Park, Gallery of Saints.

It is a known attraction among local tourists and religious devotees, especially during Holy season. (Kamay ni Hesus photo by Ana Nechelle, 2011)